Look Me in the Eye Is Out Today! 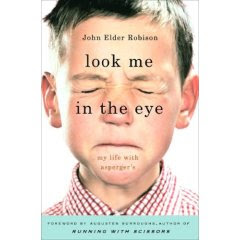 My friend John Elder Robison's memoir, Look Me in the Eye, comes out today. I'm writing about it on my blog for more reasons than simply because he is my cyber-buddy (and heck, isn't that reason enough;)). I really think that this book is going to be a huge road-builder in the world of Asperger's and want so badly for people to know that this tool exists.

For those of you who are unaware of what Asperger's is, it is a high functioning form of Autism that is often--possibly even usually--non- or mis-diagnosed. John himself did not find out just what his problem was until he was an adult and it is only in looking back that he can see how helpful it would have been to know and understand himself earlier.

I haven't read the book yet (give me a few days to pick it up. Three kids, yanno.) but I have read pieces of it and listened to a teaser from the audio book and everything about it sounds wonderful. It is getting rave reviews and, unlike my own little works of fiction, should be a truly important book in our time.

If this is the first you have heard about John, fear not, you will here more about him in the future. And from far loftier sources than me.:) (Think the Today Show and People magazine, just to name two.)

Congratulations John. And really, this is a book worth buying. I know I am.:)

They say deaths come in threes. As most of probably know, in the last ten days or so, we've lost Luciano Pavarotti and Madeleine l'Engle. After hearing that I thought about the saying that death comes in threes and wondered if there would be another to make up the proverbial trilogy. Sure enough, Robert Jordan died yesterday.

Luciano Pavarotti was not a writer. For any of you who do not know who he was, he was considered one of the greatest male tenors in the world. Absolutely amazing. He wasn't a writer, but I see no reason why tributes on this blog should be reserved only for writers. The ability to create something deep and beautiful that touches people's hearts is certainly not a market we have a corner on. If you have never heard Luciano Pavarotti sing the famous opera number Nessum Dorma, pleased do.

Madeleine l'Engle was a writer of both adult and young adult fiction, but she is best known for her Time Quartet, and most notably, the first book in that series, "A Wrinkle in Time," which earned her the Newbery Award in 1962 and is arguably the beginning of the YA Speculative Fiction era. I didn't actually read AWiT until I was an adult, but trust me, it is worth the read even if you are not a young adult. If you haven't read it, I definitely recommend that you do.

Robert Jordan is knows as the premiere fantasy author of our generation. Although he has written many books, including several Conan the Barbarian novels, he is, by far, most famous for his super-epic series, The Wheel of Time, which opens with "The Eye of the World." Robert Jordan completely re-defined the epic series with his twelve-book series, the last of which has not yet been published. Anyone who considers themselves a fantasy reader has probably read Robert Jordan, even if not the whole series (which is somewhere around 3-4 million words long. I am not obsessed with his series as many people are *cough, cough* My brother Richard *cough, cough* but I I'll always remember "The Eye of the World" as the first real fantasy I ever read back when I was fourteen.

It's sobering to lose three legends like this all in a less-than-two-week period. There are not that many true legends in the word and their numbers have now been diminished. But besides simply being famous, these are three legends who are legends for having true talent. They are not freak shows, children of wealthy or talented people, or people who have just been around so long that everyone knows them. An incredible singer, a gifted wordsmith, a storyteller with some of the greatest stamina the world has ever seen! Incredible people. I'm sorry the world has lost them.

But they will last in memory, as only the truly amazing do.

Of writing your first or next novel?

We all know we should be doing it. It's like the big science project you get in Junior High--you know you should work on it as soon as it's assigned, you even have a great idea! But somehow days and days go by and you still haven't started on it. Are you doing that with your books?

What are you doing instead?

I wish I could say I've been blogging like mad, but all of y'all would know that was a lie!:) Actually, I've been doing a lot of review reading on Amazon.com for books in my genre. (At the moment that's YA.) I justify my time by telling myself that it is "market research." . . . And it kind of is!:)

What are you doing? Posting on forums? Reading? Making bubble gum wrapper chains?

Or maybe you're one of those Hermione-esque creatures and you ARE working on your book. Well good for you! How's that going?

Okay, so bear with me--this story really will have a point . . . eventually.

I have a two-year-old son who is extremely addicted to his binky. When my daughter turned two we took her binkies away and it wasn't a big deal. However, we tried that with Brennan and it did NOT work. He was severely addicted and not only would he cry forever for his bink, he would also find them. Places I didn't even think he could reach he would retrieve binkies from. Like the binkies gave him some supernatural power to reach high places and see through solid objects. Super-Binky Man! I was beginning to think we would never get him off the bink.

Then, last Saturday he woke up from his nap (with his blue bink in his mouth) and I spotted the orange bink on the floor. (We did manage to get him down to two.) I picked up the orange bink, thinking I would again attempt to hide it in a high place when I saw it had a little hole in it. Hooray! No good for sucking any more. So I gave it to Brennan and showed him where it was broken. I said, "Okay, let's go throw it away." He was excited about that because if there is anything a two-year-old likes to do more than sucking on a binky, it's throwing things away. So he tossed his broken bink in the trash. Then, totally kidding, I tapped the blue binky in his mouth and said, "How about this one? Should we throw this one away too?" Now I was totally expecting him to shrink back and yell, "Nooooo!!!!" But to my surprise, he popped it out and threw it away. My hubby and I looked at each other in amazement, but without a word we both turned and retreated from the garbage can before he could change his mind and snatch it back.

Fast-forward to bedtime that night.

Bren went to bed okay, but about ten minutes later we heard him get out of bed and come to sit by the closed door. Then, in this sweet little lamenting voice he said, "I frew away my binky, oh no, oh no."

There are several people in my writing cyber-world who tend to start books, get like 20,000 words into them, then delete them and start over. They do this like five and six times. Now I'm not saying it's a bad thing, but I am saying that I don't understand it. It's such a permanent thing! Any time I delete a large section of text, I save it somewhere, just in case. Even if I know it's bad, I save it just in case I happen to find a place for it in either another spot in the book, or even another book entirely. If I ever deleted a big segment of text I would do like my son did--sit at the computer the next day lamenting, "I deleted that whole segment, oh no, oh no."

So those of you who do this, help me understand. Why? Don't you ever regret it? Maybe it makes you feel more like you have a fresh start. I don't know. I just have gone back way too many times to borrow back bits and pieces of a section I don't want anymore (even if it's just a line or two) to ever just delete such a large section of text. Do you ever regret it? Or, like my son (who is now binky-free, Yea!!) do you just move on?