I love announcing winners. Heck, I like bringing all sorts of good news!! So without delay, the three grand prize winners are:

and Hayley Brooks, an Ambassador of Awesome from Awesomeness Inc.

Not you? Have no fear! I have almost-grand-prize winners too! These winners will get Valentine's Day treats and swag!

and Leticia Rochelle of http://rockyiswriting.blogspot.com/

If you are a winner PLEASE email me at Aprilynne Pike at Gee Mail dot com with the following info:

Your first and last name
Your address

If you are a grand prize winner, please additionally tell me the name you would like me to write when I sign your book.

Thank you everyone who entered! It was SO incredible awesome to see so many pictures of the cover around the interwebs!!

And if you didn't win an ARC, remember that Late Bloomer Online is still running their contest!!!!!

I look forward to this day every year! And not just because of the traditional Valentine's Day fare. It's ARC giveaway day!

This year, my favorite book of the whole series so far is coming out and I want everyone to read it so badly that I'm giving away THREE ARCs instead of just one.

So if you want to enter the giveaway, what I would like you guys to do is to help me spread the cover love!

If you have a blog, you can enter by posting the ILLUSIONS countdown widget. If you already had the Widget posted, no worries! You get an entry for that too! If you post the widget or you already have, give me a link to your blog in the comments to be counted.

Anyone with Blogspot, Twitter, Facebook, or LiveJournal can enter by posting the ILLUSIONS cover for your avatar/profile picture.

If you change your Blogspot or LiveJournal avatar, leave a comment on this entry (which appears in both places).

If you change your Twitter avatar, tweet "I can't wait to read #Illusions by @AprilynnePike!" or something like that so I'll see it on my feed.

And feel free to do them all! You get an extra entry for every venue you use to spread the cover love! (So a widget on your blog, your Twitter avatar, and you Facebook profile picture=three entries!) Just make sure you leave the ILLUSIONS avatar up at least until I announce the winners so I don't accidentally miss your entry! (And, of course, feel free to leave it longer.;))

The rules: I'm afraid this contest is only open to the US and Canada because I always send Valentine's treats and I worry about sending perishables overseas. Apologies!! I will have an international contest when I get my UK copies, I promise! The contest begins as soon as I post this and lasts for one week, closing Tuesday, Feb. 22, at midnight, MST. Void where prohibited, winners will be chosen at random.

For your convenience, here is everything you need to spread the cover love!

A JPEG of the cover sized to (hopefully) fit all your avatar needs: 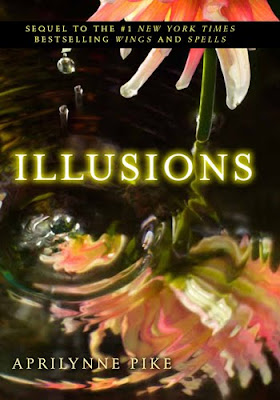 The code for posting the widget is right here.

Just copy and paste the code, should be super easy.


In addition to the ARCs there will be lots of runners up who will get Valentine's Day goodies and Wings series swag!

So thanks for helping me spread the ILLUSIONS cover around and good luck to everyone!!!

Okay, okay, I admit. My new baby is cutting into my blog time a little more than I expected. But hey! Today she's helping me blog!!!! 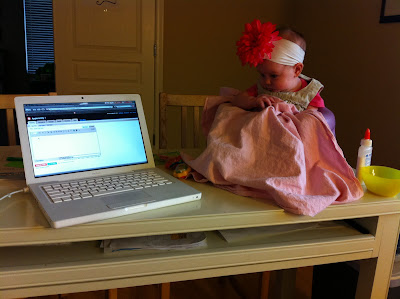 She is so fun and she is starting to make the cutest little cooing noises! *lesigh* I love her!

The Wings series has officially been voted "The Next Twilight!" in a showdown with Beautiful Creatures that spurred from a close vote between six original contenders. Thanks guys!!! In case you didn't already know, you all rock to the extreme!!!

I've had people asking me where I am touring to this year and I don't know everywhere yet (I will soon!) But what I do know is that I will be participating in Harper's summer group tour that I have been fortunate enough to be included in for the last two years. This year they have renamed it The Dark Days, a title that allows them to tack on "of Summer," or "Of Winter!!!!" Which means, yes!! They are adding a whole new leg to the tour!!! They have a fabulous website set up here with tons of cool stuff. And when the Dark Days of Winter tour is over it will switch over to the Dark Days of Summer and that's where I'll be! The Summer schedule isn't up, but I will let you know that I will be coming to Chicago, Portland, Austin, and Ann Arbor, but even more exciting for me is that the tour will be coming HERE to Phoenix!! I am so excited not only that I get to do a fun event for my Phoenix peeps, but that they will all get to see all these cool authors as well!!! (Very, VERY cool line up to Dark Days!!!) So check out the website now, and the summer stuff will be coming soon!

Okay, last thing before we get on to cookie-ing, I wanted to give you a heads up that I will be doing my annual ARC giveaway starting next week on Valentines Day. But instead of the one ARC that I usually give away, I am doing three. On top of that, my two main fan sites will also be getting an ARC to giveaway, so that is FIVE ARCs up for grabs in the next few weeks! So keep tuned!!

Okay, so this cookie is a conversation between Tamani and Chelsea. One of the very funnest thing about bringing Tamani into Laurel's world in this book is the way he interacts with her friends. Chelsea especially. So here you go! Chelsea and Tam!:D

“Do we get to play twenty questions now?” Chelsea asked.

All eyes turned to her.

“Not you,” Chelsea said, then pointed at Tamani. “Him.”

Tamani stared at her for a long, silent moment. “I’m afraid I don’t know that game.”

“Oh it’s easy,” Chelsea said, “You play it with Laurel all the time, but she never asks you fun questions. Although she did tell me about a bunch of Shakespearean plays being faerie legends. I’ve been waiting for ages to ask you the really good stuff!”

“So is it only Shakespeare, or are there more stories that exist in both cultures?”

“Oh!” Tamani said with a laugh. He sank into an armchair close to Chelsea. “There are lots. In Avalon, we love stories. The Summer fae dedicate their lives to telling stories, through dance or music or painting. But humans are endlessly inventive, always coming up with new ways to make the story interesting by telling it wrong. Nonetheless, a lot of your stories have faerie roots.”

“No,” said Tamani. “I mean, faeries don’t even wear shoes most of the time. And finding someone based solely on shoe size? That doesn’t make sense for humans or faeries.”

“What about the faerie godmother?” Chelsea asked.

“Unnecessary. We can make pumpkins grow that big without magic. And even a Winter faerie couldn’t turn a mouse into a horse.”

“Beauty and the Beast.”

“Story of a faerie who fell in love with a troll. Scares the wits out of most seedlings. The troll never turns out to be a handsome prince, though.”

“That’s just basic anatomy misinterpreted. We are born from flowers, but we’re never that small. Mischievous Sparklers were known to have encouraged tiny-faerie misconceptions, though.”

“Tell me one that would surprise me.”

Tamani thought for a moment. “Do you know the Pied Piper of Hameln?”

Chelsea looked blank for a minute. “You mean Hamelin?”

“That sounds right. That one’s not a story, it’s true,” Tamani said, very seriously. “And it has scarcely been distorted at all. The Piper was a very powerful Spring faerie. Most of us can only Entice one or two animals at a time, but the Piper could Entice a whole city. He was eventually executed for that stunt.”

“What did he do with the children?” Chelsea asked.

“It’s kind of a long story. Ultimately, though, he marched them off a cliff. Killed them all.”

Chelsea and Laurel were both silent, staring at Tamani in horror.