What I Saw and How I Pretended It Was All True

I think most authors--above all else--look forward to seeing their book on the shelf at a bookstore. That is the ultimate proof of your dream coming to fruition!

But sometimes we cheat.:)

When I got my ARCs, Harper also sent me jacket proofs. This is basically the cover without a book. :D It comes in a big long strip of shiny paper that most authors (me included) immediately fold around another book about the same size and then pretend it really is their hardback book.

Well, I've never been one to be satisfied doing what everyone else is doing, so I had to take it one step farther.

I went to Barnes and Noble and put my fake book (it was actually Claudia Gray's Evernight inside, in case you were wondering) on the shelf. Look how pretty it was.:) 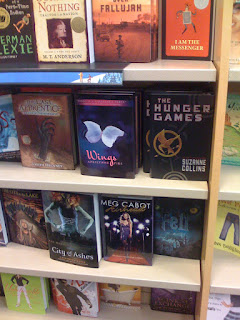 Awww, isn't that awesome. This is Wings on the new release shelf. . . and yes, yes, it IS right next to Hunger Games.;)

And this may sound odd, but I honestly had never, until that moment, thought about where it would go alphabetically. So I ran my fingers down the P's and . . . yes, there it is, right beside Christopher Paolini. *headthunk* 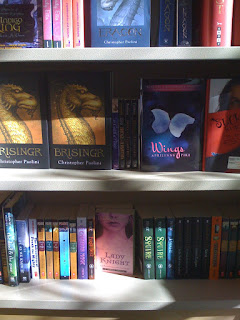 Nonetheless, I think it looks pretty there too.:)

And that brings us to the other part of the title of this blog--the giveaway portion!! This year's National Book Award winner is a book called What I Did and How I Lied I can't really say much about this book as I picked up my copy at the same time as I picked up the giveaway one, but the NBA people tend to pick good one and the cover is totally swoon-worthy. Check it out! 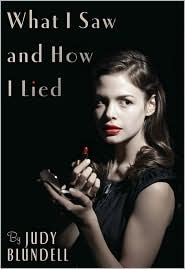 Here's the description courtesy of Powell's.:) "When Evie's father returned home from World War II, the family fell back into its normal life pretty quickly. But Joe Spooner brought more back with him than just good war stories. When movie-star handsome Peter Coleridge, a young ex-GI who served in Joe's company in postwar Austria, shows up, Evie is suddenly caught in a complicated web of lies that she only slowly recognizes. She finds herself falling for Peter, ignoring the secrets that surround him . . . until a tragedy occurs that shatters her family and breaks her life in two.

As she begins to realize that almost everything she believed to be a truth was really a lie, Evie must get to the heart of the deceptions and choose between her loyalty to her parents and her feelings for the man she loves. Someone will have to be betrayed. The question is . . . who?"

So the process of winning it is pretty simple. Post a fun holiday memory! You have till Midnight (MST) on Christmas Eve to enter!

I may or may not be blogging much during the winter break. I will be having TONS of family over right after Christmas and have a bunch of things on my plate, but even if you don't hear from me till then, I will be back with a fury in the New Year!! (Probably with a nostalgia-filled quote about 2009 being THE year.;))

So to all of you, have a good end of the year and holiday season!!! 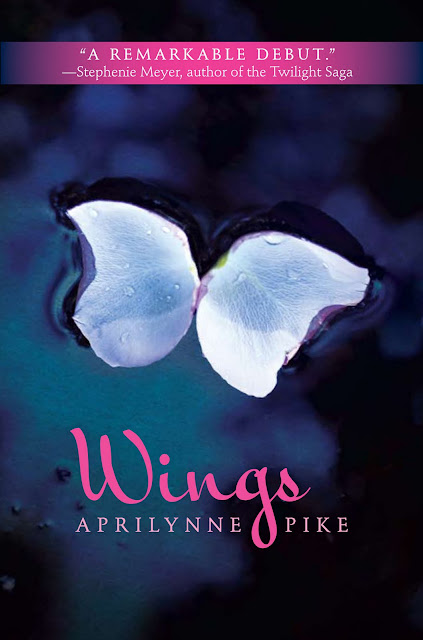 And it's been quite a trip to get here! We've actually scrapped two covers before this one and, luckily, this is the one I like the best. One of the things that I really love about it is that it has meaning. I.e., you will get to about page seventy and go, "Oooh! I get it!" Although the other covers were beautiful, they didn't have the same meaning that this one does.

So I hope it's not anti-climactic after this long, but here it is!!

Check it! I am officially listed at harpercollins.com!!!! Whoo-hoo!!!!

Also, I have a very cool little ticker!


Hmmmmm, and it appears it is such an early ticker that I can't even import it, so you'll have to go to the site I linked to and see it (or, yanno, see what it isn't yet) there.

So YouTube is totally not helping me today, but I love this part in the movie Mulan (well, I love the whole movie, but this one part is relevant today ;)) where Mulan is running out of the tent because she's late and Mushu calls, "Wait! Wait! You forgot your sword." *sigh* "My little baby, off to destroy people."

My ARCs are out. (And yes, I will be having an ARC contest here. Just as soon as--yanno--I get permission to actually show a picture of the ARC.:D) Up until now, the only people (other than agent, editor, etc.) who have read WINGS who are not family are . . . well, close family friends who are basically family. That's pretty much it. I've kept this one pretty close to my chest (and book two is even closer!) So now, all of the sudden, people I don't know are reading it. People who I know but aren't close to are reading it. Complete strangers who I am never going to know, are reading my book!

It's a little terrifying.

I have never been the clingy parent. When my daughter started first grade (she didn't go to kindergarten) I sent her off to her first long day of school (minutes before leaving to catch a plane, actually) with full confidence that she was a brave, bold, strong girl who could take school by storm! And having watched her knock a boy two years older than her down for killing her caterpillars, I knew there was an aggressive side to her that would come out if she got in some kind of extreme situation.:) I was very confident in my baby's ability to conquer the challenge of school!

Luckily, I get to put that particular challenge off for one more day.:) I recieved my first official review this week from a staff member at Borders! You can find it here. (You'll have to click on the little "Customer Reviews" tab.) And here's the text:

"Stephenie Meyer is nuts about this book, and it's easy to see why. Like the Twilight Saga, Wings mixes mythology with high school in a pleasing blend of romance and action. Aprilynne Pike uses botany and homeopathy to create a fresh twist on the tired idea of faeries, with northern California as her backdrop. If only the Cullens made a guest appearance. ;)"

And she gave it four stars. At first I was a little dissappointed to not get five stars (we all dream big, right??) but my friend Carrie pointed out to me that her book only got four stars as well. And if my book can be rated as high as the fantastic awesomeness of The Forest of Hands and Teeth, then I'm not doing half bad. I'll take that as a major compliment!:)

Oh, and my brother's best friend gave WINGS my first non-family male thumbs up as well. And that is a hard audience to catch with a teen romantic-fantasy.:D